Life with a Viking is never dull or adventure-less. This post will be in two parts… the first (this one) being the more traditional Iceland sight-seeing adventure… and the second one will be when Jón got bored of regular adventure and found a much more exciting way to show me Iceland.

So after a week of solitary confinement I was itching to get out and about and explore this amazing area… Jón dutifully arrived on Friday evening… to a home cooked meal and a very excited artist in residence. In his usual Icelandic manner, I was told we would make plans for the weekend weather dependant… which means you get in the car look up at the sky and then decide… and even then it is highly likely after 15 minutes another plan may be hatched. A fresh snowfall coated the mountains as we drove between beautiful valleys and large farms — hardy and hairy Icelandic horses and sheep lining both sides of the road sheltering amongst the snow drifts. We trundled along rugged up for whatever awaited on Route 36 towards our first stop… Haukadalur, a geothermal area. There are two famous geysers here called Geysir and Strokkur. In fact the general term “geyser” was named after this particular one in Iceland; the Icelandic verb gjósa means “spring”. The Earth churns up boiling hot water that smells like rotten eggs, with steam rising from vents in the earth next to mud pools, fumaroles, and mineral deposits.

Haukadalur is one of the numerous sites in Iceland where the volcanic heat reaches the land surface. The local volcanoes seem to be extinct – there have been no eruptions for 10,000 years at least.

The original Geysir no longer erupts after an earthquake shut it down, but a second one called Strokkur geyser, is still very active and constantly explodes with scalding water shooting 100 feet into the air every 10 minutes or so. It was set off during an earthquake in 1789, and is thought probable to have been active before. The year after Strokkur started to spout it was extremely powerful and ejected water, gas and steam with tremendous force. By 1830 it had calmed down considerably and rarely spouted on its own accord… so people had to encourage it with stones and turf, which the spring would subsequently throw up. By 1920 it had expired again. On the recommendation of the Geysir committee, a 40m deep hole was drilled from the bottom of its basin in 1963, after which it has spouted or at least squirted merrily ever since. Discharge from the spring, or rather from the borehole, is currently 2.5 l/s.

How does a geyser work? The formation of geysers is due to particular hydrogeological conditions, which exist in only a few places on Earth, so they are a fairly rare phenomenon. Generally all geyser field sites are located near active volcanic areas, and the geyser effect is due to the proximity of magma. Generally, surface water works its way down to an average depth of around 2,000 metres (6,600 ft) where it contacts hot rocks. The resultant boiling of the pressurized water results in the geyser effect of hot water and steam spraying out of the geyser’s surface vent (a hydrothermal explosion). Thanks Wikipedia!

In the geothermal system feeding Strokkur, subsurface temperatures of about 240°C are thought to exist, probably at a depth of 1 km and below. 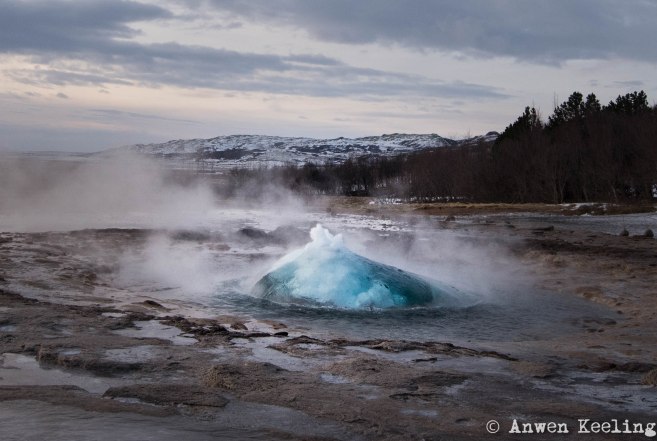 Next stop…. the dazzling Gullfoss Waterfall. The mighty Hvítá river abruptly disappears into a ravine, creating a spectacular waterfall called Gullfoss, a major highlight on Iceland’s Golden Circle. This wide & fast moving river turns a corner and falls 100 feet into a crevice in the earth, producing thick mist & frequent rainbows. 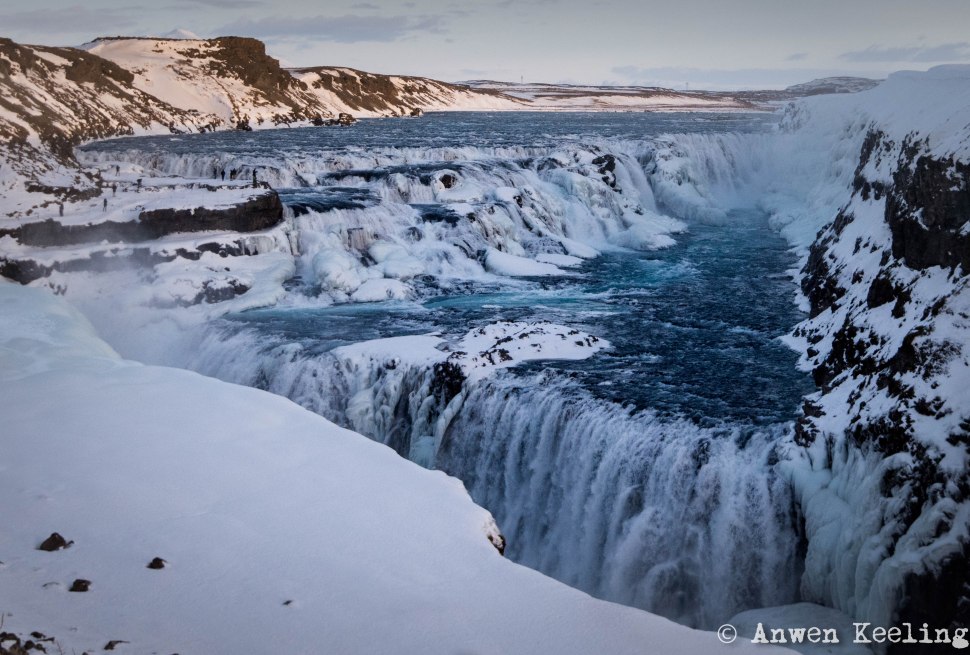 After descending a long staircase from the parking lot that might of had a “CLOSED” sign at the top, a snow and ice covered pathway allows visitors to walk along the edge and look down into the roaring cascade of water. The area around the falls gets pretty windy, and the temperature dropped dramatically when you got close to it, luckily I had my ice spikes with me- which the dear Viking called my “Old lady Spikes”… something he was incredible jealous of, but luckily I found a similar lone abandoned spike, so atleast he had grip for one foot.

The Story of Gullfoss…

Like everywhere in Iceland, there are stories, folklore and real tales. The history of this waterfall is a dramatic one. Sigríður Tómasdóttir, the daughter of Tómas Tómasson who owned the waterfall in the first half of the 20th century lived at a farm nearby and loved Gullfoss as no one else.

At this period of time there was discussion about using Gullfoss to harness electricity. Foreign investors who rented Gullfoss indirectly from the owners wanted to build a hydroelectric powerplant, which would have changed and destroyed Gullfoss forever.

As the story goes it’s thanks to Sigríður Tómasdóttir that we still can marvel at the beauty of Gullfoss, because she was the one that protested so intensly against these plans by going as far to threaten to throw herself into Gullfoss and therby kill herself.

To make her threat believeable she went barefoot on a protest march from Gullfoss to Reykjavik. In those days the roads weren’t paved and when she arrived after 120 kilometers her feet were bleeding and she was in very bad shape. The people believed her and listened and the powerplant at Gullfoss was never built. Today one can see the memorial site of Sigríður that decipts her profile at the top of the falls.