CAVEAT – This is the unedited ramblings of someone who seems to be at least double the age of the average back-packer and should know better than to plan trips on the whim of a few glasses of very nice Pinot Noir. 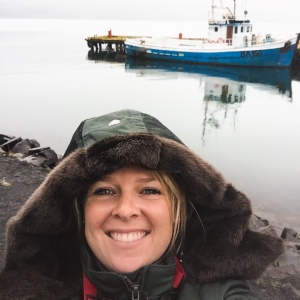 I now find myself undertaking a 4 week artist residency; precisely  66° North, within the Arctic circle on a small island in Northern Iceland called Hrísey; a total land area of 7.67 km2, and is about 7.5 km long by 2.5 km wide at its widest point in the south. It is the second-largest island off the coast of Iceland. I have decided to write this blog and keep my random and unstructured thoughts and experiences here… Instead of bombarding and boring you all on Facebook with bad selfies & dramatic landscapes and as a form of proof of life for my tolerant parents.

So I had a humorous start to this adventure. My bags turned up after being told I had a 50% chance of them joining me, after undertaking 3 separate budget airline flights. I was then kidnapped by the most lovely and hilarious taxi driver. She refused to drop me at the domestic airport (shed) 2hours before my flight (the done thing is to turn up 1/2hr ahead no more) she took me on a random tour of Reykjavik- first stop an elf garden (didn’t see any??) then drove about and looked at various places; followed by a hot dog; a trip up a bell tower of a church and then I was allowed to be dropped at the airport!! She told me about the only “Penis” museum in the world- it has one of every animal that lives in Iceland including a poor old man (particularly small)… But some young Viking has offered his in the future… Apparently the setup is very classy! I was also shown the two main hospitals just in case & told I must try stewed Sheeps face, horse and whale (none of those will pass my lips I can promise you) Brilliant introduction though!! On arrival at the airport/shed the reason for not being there more than 15mins was very apparent…. there is no security whatever- you just get a small receipt from the girl at the desk 15mins prior to departure and then wander out on to the tarmac to the very small propeller plane.

The Opera House in the distance has beautiful glass like fish scales. 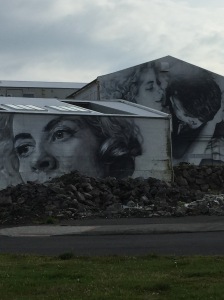 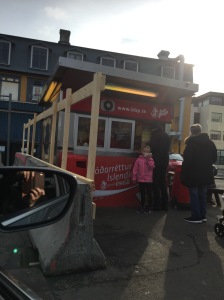 The infamous hot dog stand featured in all the guide books. It is a VERY popular hot dog stand in central Reykjavík, right near the harbor and concert hall. Open since 1937 and staffed by an older woman and helper. According to my driver most Icelanders have eaten here and return regularly, and Bill Clinton, former president of the United States, ate here – supposedly right before his heart attack.  I ate mine too quickly to document… lets just say it tasted better than it looked. Most assume this is the Penis Museum ;), this is the Hallgrímskirkja. It was designed by the late Guðjón Samuel in 1937, who was inspired by the fascinating shapes and forms created when lava cools into basalt rock. Construction of the church began in 1945 and ended in 1986. 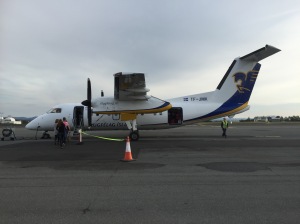 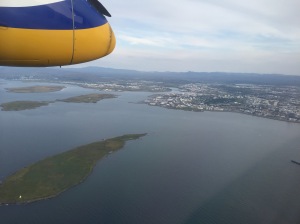 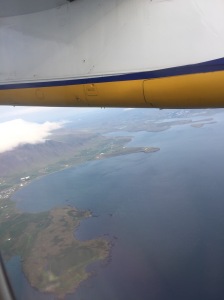 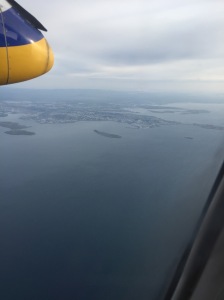 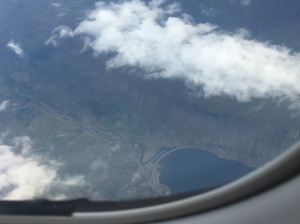 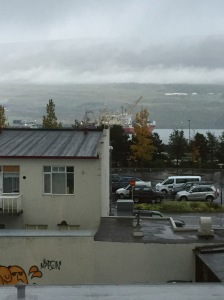 On arrival at Akureyri I met a lovely Norwegian girl and we decided to share a cab- a good idea in principle… but there was only one cab and that had been snaffled by some wiley locals. Luckily the pilot of our plane noticed our predicament and kindly dropped us into town. A charming little town, with cafes and plenty of shops selling icelandic jumpers made in China 😦

I spent a great evening in the company of Kathi, the Norwegian who is from the northern corner of Norway and is a cartographer who works in tunnelling. After a night in a little hostel and a morning spent trying to discern the best method to reach the ferry to Hrísey- the general consensus was the bus drops you approximately 15kms away and 2hrs early- fine if it is a nice day, but not so good with precipitation about as there is no shelter at the little port. The best option according to the lovely girl at the reception of the hostel next to mine (no one ever was in the reception where I actually stayed?? Just a key in an envelope when I arrived) was to hitch- the sticking point was to get a ride in the right direction I had to walk another 5kms in the rain to the petrol station outside of town. After a brief totter down the road and a good down pour I found shelter in a little cafe who called the only cab in Akureyri… I will save hitching for when I am not lugging my computer/cameras & 20kilos of thermals….

After being deposited at the ferry stop a nice lady called Lolo who was sitting in her car came over and told me to come and sit in her car till the ferry arrived, I will have tea with her tomorrow! The ferry is a lovely little boat, and only a 15 min trip. My temporary new home was with in reach!! 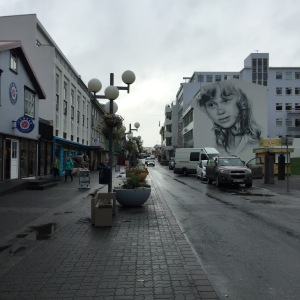 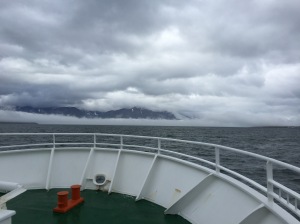 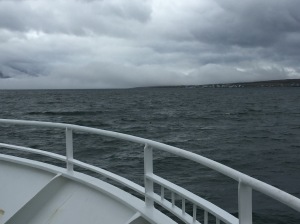 The residency is at a wonderful little place called the Old School House (http://www.nordanbal.is/en/hrisey/old-school-art-house-in-hrisey).

The Old School House and bike

The very important tiny store. And the restaurant run by a recalcitrant Norwegian who doesn’t open it very much- or cook very often…

The locals proudly display their tractors in their front garden- I am sure there are many cases of tractor-envy as they seem to be quite the status symbol! 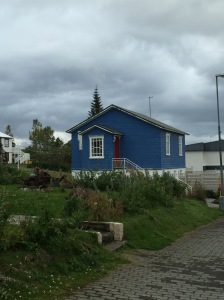 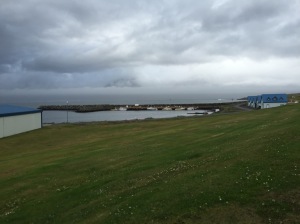 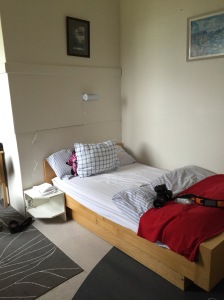 And last but not least the palace in which I sit writing this.

Here is some info I copied from another page about the island:

Hrísey is a peaceful island in the middle of Eyjafjörður, it is the second largest island in Iceland, after Heimaey in the south. The island is a well known paradise for bird watchers and the most abundant of all birds on the island is the ptarmigan. About 40 species of bird nest on the island. The northern part of Hrísey, is a privately owned nature reserve. Permission must be obtained from the landowner if you wish to pass through this area.

We recommend a walk along one of the 3 marked routes ranging from 2.3 km to 5 km (the routs take about 1 hour to 2.5 hours easy walk) or simply stroll through the village and visit the local museum or handicraft store. If you get hungry, visit the restaurant or the village’s local store.

During summer one can enjoy a sightseeing tour of the island with a tractor. On the tractor tour, you sit in a cart pulled by a tractor through the village and surroundings. The guide informs about the island’s and the village’s history. Duration approximately 40 minutes.

There are about 200 inhabitants on the island, living in a trim fishing village with paved streets, tidy gardens and a view of the surrounding mountains which can be equalled by few. A ferry connects Hrísey with the mainland by the village of Ásskógssandur. The journey only takes about 15 minutes. The time schedule varies according to time of year, for further information on ferry schedule